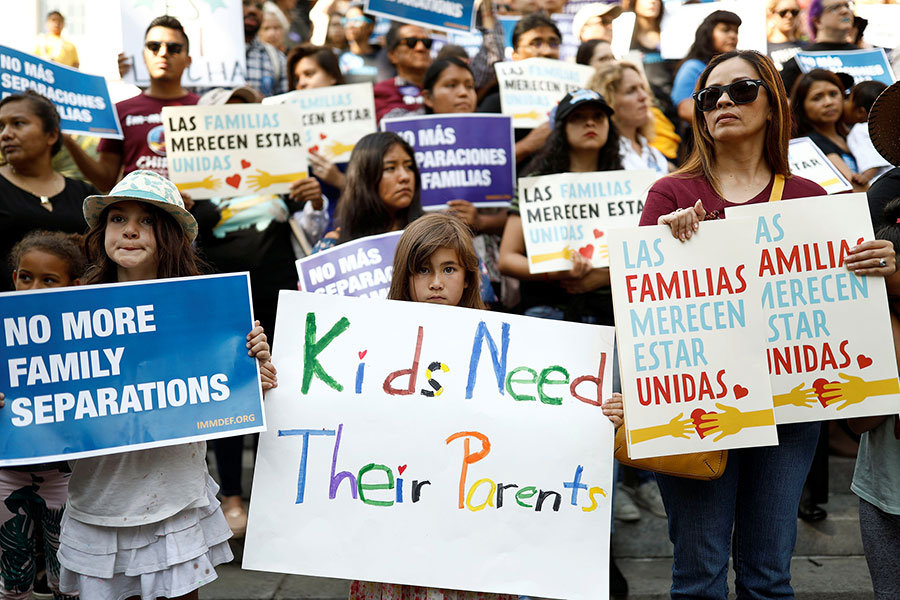 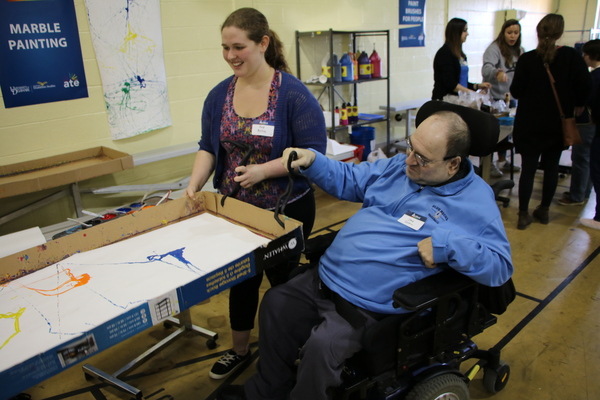 Steve Slotkin and volunteer Anna Mellos work together on his marble painting project at Artfest 2018.

Opportunities for Artfest participants – individuals of all ages, backgrounds and types of disabilities – to express their artistic sides appeared endless, thanks in no small part to the encouragement they received from UD student volunteers.

As a graduate assistant with CDS’s Communications and Advocacy unit, I took on the role of Artfest coordinator, which in the weeks leading up to event made me focus on its logistics. But the event’s inclusiveness and accessibility, the friendships and self-expression that were so vividly on display – the sheer joy of the day – are what I see and think about now.

Along with the people who, most of all, made Artfest a success. Lisa Bartoli, the creative director of Artfest and the lead artist of Art Therapy Express, has been Artfest’s guiding spirit since the beginning. This year marked her 11th Artfest, and she and her team of outstanding interns wowed participants and volunteers alike with their adaptive art tools, inspired art stations and drive to make the event innovative on the one hand and fun on the other.

Artfest stallwarts like Shiber, who this time around attended her 10th Artfest, and the wonderful student volunteers – several of whom have volunteered at multiple Artfests – also ensured its success.

And, for me, made Artfest an absolute pleasure. 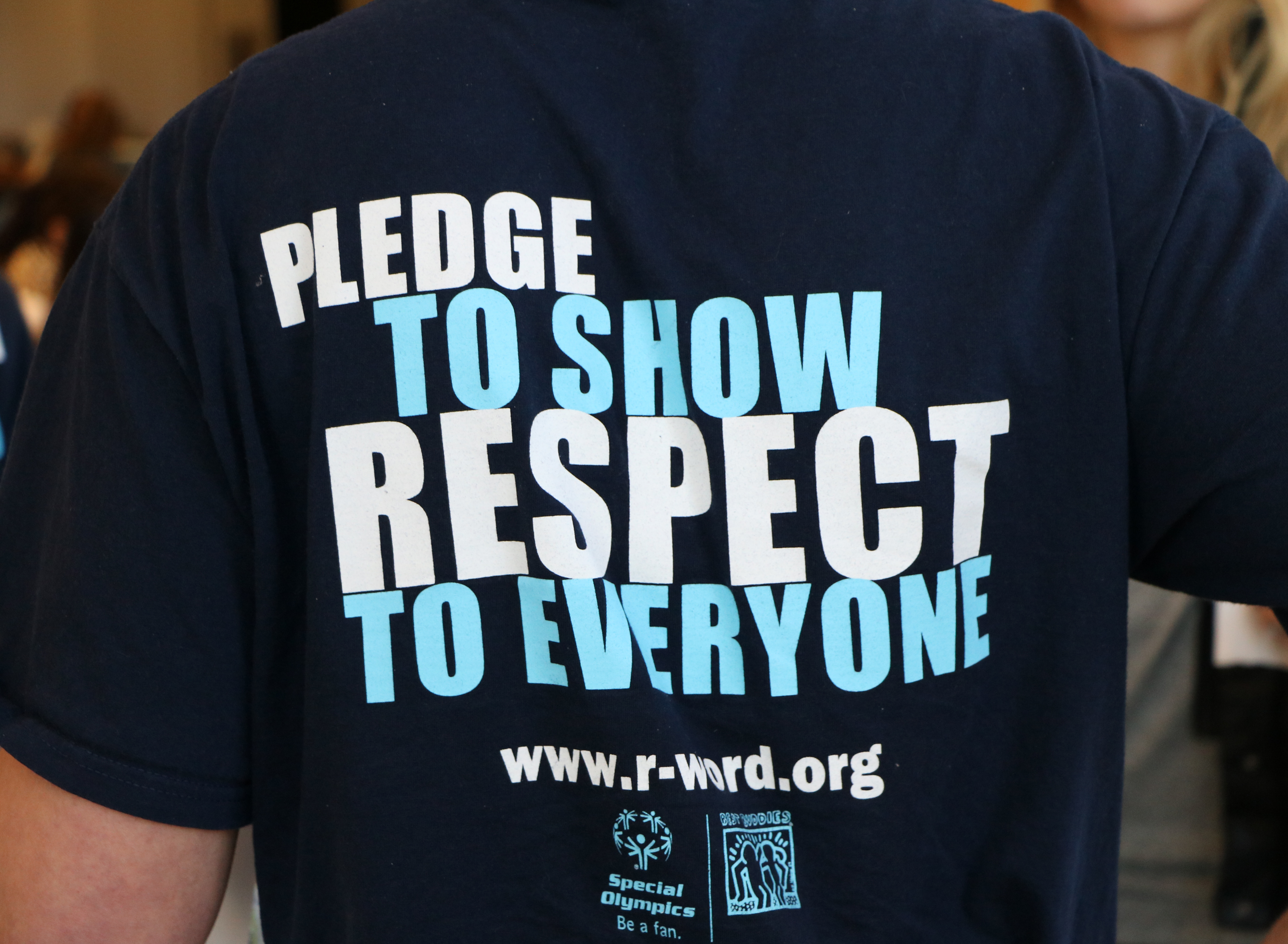 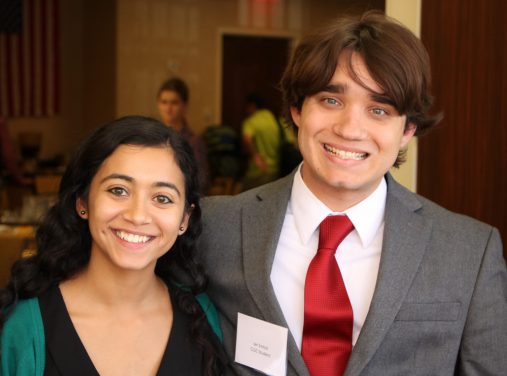 A “classic” student and his coach: Ian Snitch and Jasmina Chatani.

It would be just one of many things Ian said and did on Disability Mentoring Day (DMD) that impressed and amazed me. A first-year student in the University of Delaware’s Career and Life Studies Certificate (CLSC) program, Ian, along with 12 other CLSC students, spent the day getting hands-on experience in a preferred work setting and connecting with business partners. The other CLSC students job-shadowed at area sites that included U.S. Sen. Chris Coons’ office, UD Student Financial Services, WMPH Radio, the Newark Senior Center, Unique Impressions and Pet Kare.

I was Ian’s coach for the day. And it was one of the most enriching experiences I’ve ever had. My first thought upon meeting Ian was — he’s a SWEETheart! Ian introduced himself, asked what year I was (I’m a first-year graduate student at UD) and talked about his favorite band, One Direction. He was undeniably friendly and kind. Later, at the Courtyard by Marriott, he learned how to manage the front desk. He listened intently as the front desk supervisor, Michael Bandy-Pistory, explained the guest check-in experience. Ian then asked lots of clarifying questions. He learned how to enter guest information into the hotel system and how to print copies of keys. In no time at all, Ian, by himself, was making copies and putting them in the small room envelopes for future guests! Ian even learned how to upgrade someone’s room in the system and was able to get a guest into a suite.

Michael noted that Ian was a fast learner. Was he ever!

At the DMD afternoon lunch reception, convened at the Courtyard and attended by the CLSC students and their coaches, all students were invited up, one at a time, to discuss what job site they had visited, what they did there and if they’d like to work in that field in the future. As the first and then the other students went up to speak, my senses were slammed by an outpouring of support. Cheers, claps and compliments were thrown up in the air like confetti. I was thrilled to see how happy and proud everyone was. This experience-sharing lasted about half an hour. By the end of it, I realized I had been smiling the entire time.

After Disability Mentoring Day, I reflected on my experience. The positive energy throughout the day was tangible. DMD was wholesome, inviting, inspirational and memorable. Who wouldn’t want to be part of that?

The sad fact is that a large majority are not a part of it. According to the Office of Disability Employment Policy, the unemployment rate of people with disabilities is nearly double the rate of those without disabilities (7.5 percent vs. 3.9 percent).

Why? Why do individuals with disabilities face employment discrimination when they just want what everyone else wants? They want jobs they enjoy and jobs that allow them to make a living.

The 13 students I had the privilege of meeting and hearing from on Disability Mentoring Day were eager, kind-hearted and competent. If they’re given a chance to prove how much they’re capable of doing in a job of their choice, employers would see what I saw yesterday. It’s painful and upsetting to think that young adults with disabilities who miss events such as Disability Mentoring Day or similar opportunities may acquire fewer resources and connections, making finding a job that much more difficult.

When employers are looking at the applications of two job candidates, one with a disability and one without, they should base their hiring decision on the applicants’ ability to perform the job and the applicants’ potential to grow.

Ian says he “really wants to be a bell hop.” When given the chance, he impressed staff and guests alike. Who wouldn’t want to hire him?