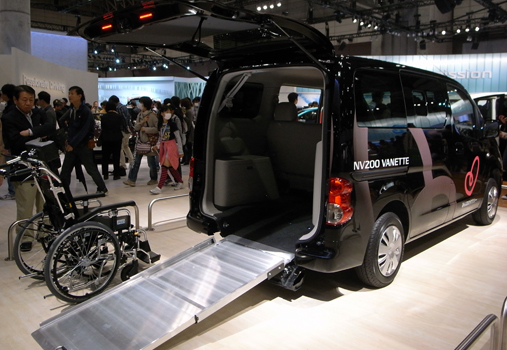 A colleague and I were left waiting for his DART paratransit bus, yet again, last week. It would arrive a full hour and 15 minutes after his scheduled pick-up, giving us abundant time in the hot sun to grouse about and consider the ever-late paratransit bus in Delaware. I’ve worked in the disability sector in Delaware for more than 15 years; the late pick-ups and drop-offs were a problem then and they continue today. We brainstormed how we could change the system to better serve people’s needs.

Our conversation led us to talking about Uber, the popular quick pick-up transportation service taking the country by storm. I quickly logged onto Uber to figure out how much it would cost for him to get from his residence in Wilmington to Newark for our meeting and then back home. At first, I was startled by the cost of $25 each way; especially compared to his $3 paratransit fare (now $4 for non-ADA routes). That seemed way too prohibitive. This didn’t even take into account that he needs a wheelchair-accessible vehicle to drive him. He doesn’t have an option to “just call a cab,” since accessible cabs aren’t available in our area. The more talking we did, the more I started to wonder about the cost.

One of the biggest barriers people with disabilities face is being un-employed or under-employed and that’s often due to not having reliable transportation. If my colleague were going to work every day, do you think his boss would tolerate him showing up an hour late on a regular basis? You better believe not. However, if my colleague knew he had reliable transportation that would take him to work when needed and take him back home at the end of the day, would he be able to land that full-time job with competitive wages? I would think so.

We estimated that he would pay about $12,000 per year for an accessible Uber to get him from Wilmington to Newark and back (five days a week for 52 weeks). At first that seemed ridiculous to me, but then I thought about how much I spend each year on gas ($1,200), car insurance ($1,044) and car maintenance ($1,000). While I’m fortunate that I don’t have to factor in parking – it’s free at my job – parking for many commuters adds another significant expense. My husband, for example, has to pay a $2,100 parking fee annually. My colleague wouldn’t have to incur any of these costs as an Uber-user, however. Moreover, his cost of using Uber could be further reduced if, say, he were to find a job that required him to travel just a mile or two up the road. (When I searched for an Uber from the City of Wilmington to North Wilmington, the quote was $12 – less than half the Wilmington-to-Newark fare, which would essentially make my colleague’s travel expenses the same as mine.)

What we need is for owners with accessible vehicles to join Uber, and to designate themselves as accessible Ubers. Then we could try it out! If people with disabilities had access to reliable accessible transportation, they’d be able to get the jobs they want and become more vital members of the community. Waiting 75 minutes for a bus, alone or with a colleague, is never acceptable and isn’t going to move us forward to a more inclusive world. I also have to wonder whether Human Resources departments, as part of their employment offers, would cover all or part of the Uber fee since doing so would guarantee that the employee would be at work on-time and able to fully participate in the work environment. For businesses that already cover parking fees for employees, subsidizing employees’ use of Uber wouldn’t be that different.

So, accessible vehicle drivers who have vans that sit in drive-ways and garages when not in use, what do you think? Imagine the freedom you’d be offering people who physically cannot drive by bringing them to work, or, at a moment’s call, taking them on an unplanned date or trip to the grocery store? Right now, riders of paratransit in Delaware can’t have spontaneity in their lives, as they are tied down to a reservation system which requires two day’s notice. Working as an Uber driver would earn you money while also helping you promote the ability of individuals with disabilities to gain employment and be active members of the community.

Cory Nourie is the Patient Transition Social Work Coordinator at the Nemours Alfred I duPont Hospital for Children in Wilmington, Del. where her mantra — “Is it is helpful or positive?” – guides her energy and efforts.