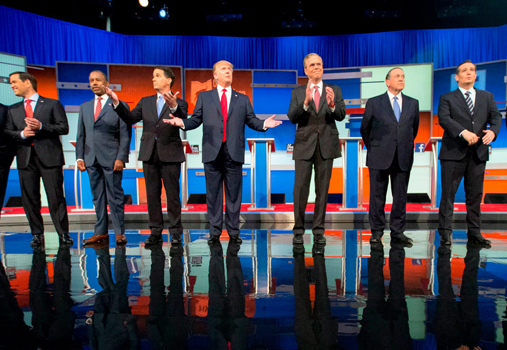 If you answered b or c, thinking five or seven times sounds about right and should seem reasonable to the one-in-five people watching the debates who have a disability (and the more than 50 million Americans who live with a disability), you’re mistaken. The answer is “a” – one time. In September, contestants were asked about Donald Trump’s false contention linking vaccines and autism.

Could moderators and debate sponsors think questions about disability wouldn’t hold the interest of a general audience? They appropriately ask questions about important issues that directly affect other minority groups, including African Americans and Hispanics. Why not address issues of equal importance to the nation’s largest minority group – people with disabilities?

In town halls and at other events, candidates have touched on disability – when they’re prodded by audience members, on their own, and on the rare occasion when a moderator raises the subject. Hillary Clinton applauded former Iowa Sen. Tom Harkin at a town hall for passing the Americans with Disabilities Act. Ohio Gov. John Kasich asked his audience at a town hall to imagine a new national “brain” initiative that could speed advances in the research and treatment of conditions from Alzheimer’s to autism. Vermont Sen. Bernie Sanders spoke of the need to fight for disability rights in his victory speech following the New Hampshire primary.

Some candidates don’t wait on forums to address disability. Former Florida Gov. (and former presidential candidate) Jeb Bush captioned a video on his website that launched his candidacy. Clinton in January unveiled a plan designed to push states to require health coverage for autism services in private insurance plans. Sanders at his website calls for the U.S. to ratify the Convention on the Rights of Persons with Disabilities.

Nevertheless, if debate moderators don’t take the opportunity to at least occasionally ask candidates about disability, they squander the chance to get the person who will be our next president to discuss it on the campaign’s biggest stage.

Of course, voters can visit a candidate’s website to learn about his or her positions concerning disability. But voters won’t always find the information there. Florida Sen. Marco Rubio’s website only mentions disability once. It says he “will support innovation in K-12 education by promoting better learning opportunities for students with disabilities.” Dr. Ben Caron’s website only says that “we must give special needs students the option to choose where they attend school,” and that “we must also allow funding” under IDEA “to be used towards tutors and other training programs.” Neither Texas Sen. Ted Cruz nor Donald Trump mention disability at their websites.

They and the rest of the candidates would be compelled to do so, during debates, if only they were asked.