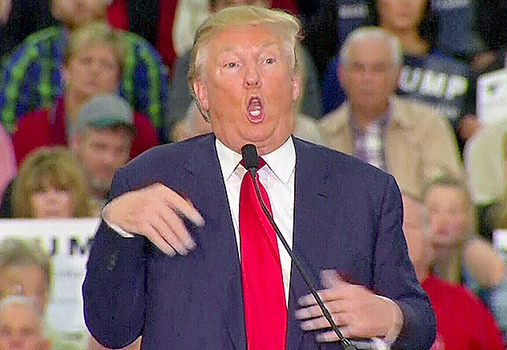 The president-elect infamously mocks a reporter’s congenital joint condition at a campaign rally.

She promoted a plan designed to push states to require health coverage for autism services in private insurance plans, and called for an inclusive economy with expanded job opportunities and no subminimum wages.

In Trump, the community saw a candidate who drew imaginary ties between autism and vaccines, ignored disability issues at his campaign website, and publicly ridiculed a New York Times reporter by mocking his congenital joint condition.

But despairing, denying or ducking and covering won’t assuage the reality of Trump. Coming to a fuller appreciation of him, then engaging him head-on, may.

I was surprised, as I suspect many of you would be, by reading some of the answers he (or, more likely, one of his proxies) gave during the campaign to a questionnaire created by the American Association of People with Disabilities and the National Council on Independent Living.

Trump said he will “consider the possible creation of a National Office of Disability Coordination,” said his administration will “set an example of the importance and value of hiring individuals with disabilities,” and said people with disabilities “have the right to be paid on parity with all others in the work force so they may earn a fair day’s wage for a fair day’s work.”

He said “we should integrate into our investments in infrastructure and transportation assets policies to provide to the extent possible services required by people with disabilities,” called Individuals with Disabilities Education Act (IDEA) funding “among the many priorities,” and vowed that he’d “ask a Cabinet-led task force to review and work with Executive Branch agencies and Departments and Congress as appropriate” to see that students with disabilities, and, indeed, all students, are not bullied in school.

He even said, “Dealing with the challenges of employing and training young people with disabilities will require my administration to work with Congress. I would support legislation concerning those goals.”

I told you. Surprising. More predictable, perhaps, were his dismissive or evasive answers in the survey to a question asking whether he’d reform federal programs so people with disabilities can receive income supports without foregoing working (Answer: “(B)y eliminating ineffective programs … we can deliver improved outcomes”) and a question asking how he would ensure that students with disabilities have the same access to ambitious educational opportunities as other children (Answer: “The federal government should have as minimal a role in local public education as possible”).

Yet why be entirely despondent over Trump for those seemingly closed doors when the others I noted appear ajar? Or sulk because of his earlier inattention to, and ignorance of, disability issues? Or abandon any hope for advancement due to his reprehensible ridicule of journalist Serge Kovaleski?

Better to engage him. Insulting others comes as naturally to Trump as breathing, but so does his uber-need to gain others’ approval. Opportunities at redemption won’t motivate him to reach accommodations with the disability community on policy initiatives. But chances of winning the approval of at least some of the 1-in-5 people in this country with a disability might.

Barack Obama supposedly carried progressive bona fides with him to the presidency, but his shockingly insensitive off-the-cuff put-down early in his first term of Special Olympians on a nationally televised talk show (laughingly likening their athletic performances to his underwhelming accomplishments at bowling) immediately made me think of him as a pretender. Someone whose true feelings and thoughts about inclusion and tolerance didn’t match the messaging of his speechwriters.

I dismissed him. Wanted nothing to do with him. Until the next day, when I thought it better to engage him. Fortunately, leaders in the disability community thought it better to engage him, too. With Obama they worked to, among other things, reinstate former President Bill Clinton’s order to hire 100,000 more federal employees with disabilities in five years, launch an educational initiative to inform employers of tax benefits tied to employing people with disabilities, set goals and deadlines to help meet affirmative action requirements in the Rehabilitation Act concerning hiring adults with disabilities, and commission a study to provide a window on how well or poorly students with disabilities are transitioning to jobs and higher education.

Maybe we won’t get as much with Trump. (Indeed, I wish we’d gotten more with Obama.) But it would be a mistake, a tremendous mistake, not to engage him.

Engage him and we’re likely to get some wins that, with a little messaging, Trump each time could spin as a win-win. A win for the disability community, a win for his administration. If nothing else, Trump likes winning.