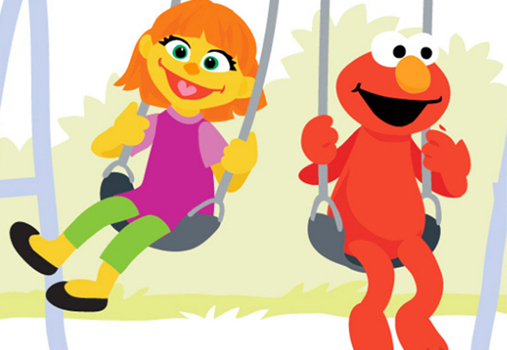 Like millions of other children, I grew up watching Sesame Street for its colorfully entertaining characters. Looking back, I realize that these characters not only opened my eyes to the world of education at a critically young age, but helped me develop an extremely open mind toward diversity. I may no longer be part of its target demographic audience, but I can’t help but be captivated once again by Sesame Street and the introduction of its newest Muppet playmate, Julia.

In case you haven’t heard, Julia has autism. According to numerous reports, she was created to better reflect and respond to the growing prevalence of autism in the world, to minimize bullying towards children with autism, and to give parents of children with autism another resource that encourages social interaction and mental growth. As a digital character, Julia also quite naturally appeals to many children with autism who are drawn to various forms of technology, and Julia’s accompanying song, “The Amazing Song,” amplifies what typically and non-typically developing children have in common.

My school, the University of Delaware, shares my passion for disability studies. And Annalisa Ekbladh, who coordinates autism planning initiatives at UD’s Center for Disabilities Studies, actually had a hand in helping Sesame Street develop the character of Julia. Sesame Street came up with the initial concept of Julia’s character. But Sesame Street also asked CDS to help it gather critical information about autism from focus groups comprised of family members of individuals with autism. Ekbladh and her team at CDS recruited the focus group members from Delaware’s Kent and Sussex counties. Among the information gathered from those focus group sessions: families who designed and used step-by-step routines for their children said that when the routines were directed by a Sesame Street character, such as Elmo, their children were much more likely to follow them. Because of that discovery, the parents said they’re always thrilled whenever electronic characters appear on the same devices that their children with autism utilize for communication and intellectual development.

I suspect the introduction of Julia will benefit many children with autism and their parents. But her introduction should provide another advantage: For more typically developing children who tune into Sesame Street, when they come face-to-face with an individual with a disability in school or anywhere else, they simply may perceive that person’s disability as a difference. A difference, and nothing more.

“So much of what we have to do to promote equality is to change people’s minds about people with disabilities,” Ekbladh told me. Sesame Street’s proactive approach, she said, should only help.